Watching guides on Sekiro: Shadows Die Twice is a surefire way to spoilers.. However, this Sekiro Beginners Guide provides you all the tips and resources you need to be successful without any spoilers.

There has also been a tendency to share too much information. So much so that the process of discovery and the reward of achievement has been stripped away from the player. This of course, is not what a new player would want nor should want and has been taken into consideration when making this guide. The fundamentals are enough to make your own way in this world.

First things first, you are a Shinobi, a rogue. Not a Samurai. And when a Shinobi is taking on an army; it is best to keep within the shadows. The game is a balance between quick assassinations and swift sword to sword combat. So when the time comes to face your enemy, your weapons must meet. And blocking, deflecting and the timely use tools & techniques are the key to overcoming them. 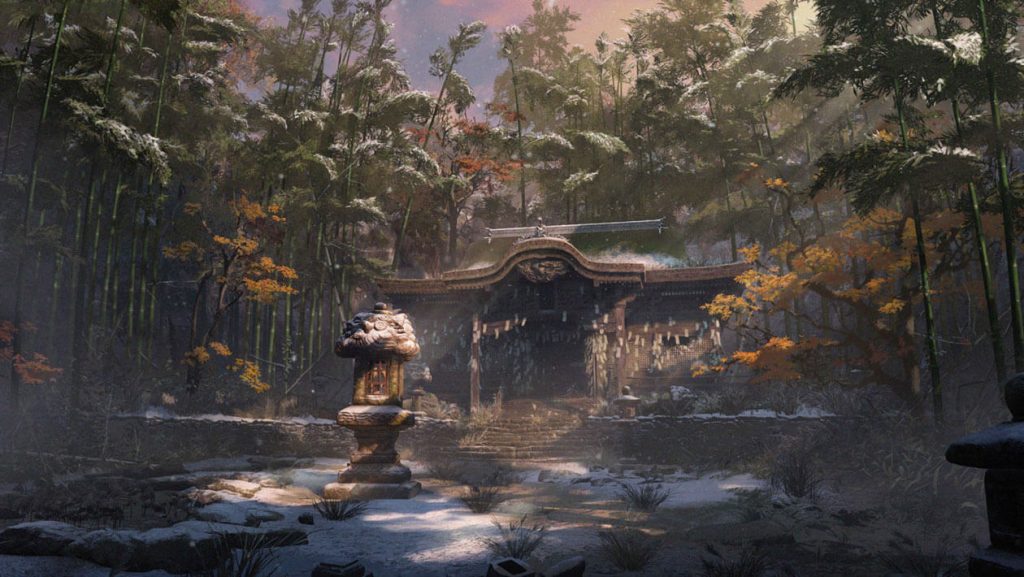 This hostile world that you will find yourself in, is sparsely populated with allies. Make sure visit them often and show your gratitude. The temple is now your new home. Frequently make visits and speak to the Sculptor, especially early on. Another important ally is Hanbei the Undying. Make sure to practice with him and allow yourself the time to grasp the games basic mechanics. As you begin to unlock new abilities make sure to keep to the habit. Your Homeward Idol is designed for this very purpose and can be used anywhere outside of combat.

Infinite grapple allows you to move much more quickly and fluidly in terrain that is familiar to you. Use it to save time and for quick getaways. Remember that if the enemy is aware of you they will throw objects at you, so do not stand in ideal while on high positions and make use of this mechanic.

Eavesdrop whenever given the option. It provides you with tips about enemies, situational lore in addition to hints as to what may come next. Do not worry if you kill an opponent before eavesdropping as the option will arise the next time. 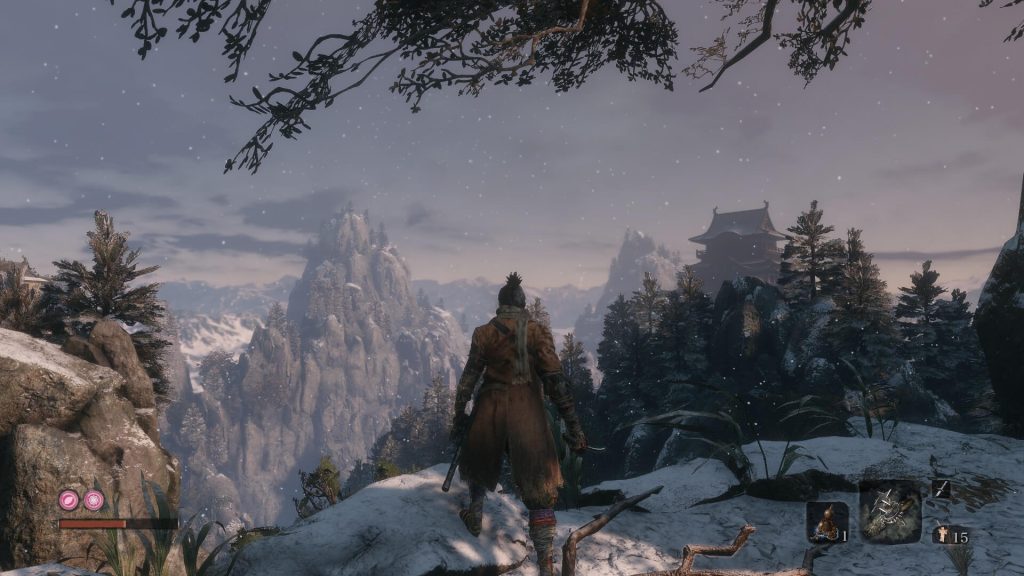 Explore, there is so much hidden just in the Ashina area. This is a consistent part of the game. Many paths lead to the same road. Many hidden items and NPCs will be found while exploring and uncovering new territories. Which will often add to your prowess and power. So don’t be concerned about being sidetracked. Since the game rewards this greatly. This is why exploration and taking your time matters. Don’t beat your head against a wall, when you can jump over it. Often times you are simply missing something. 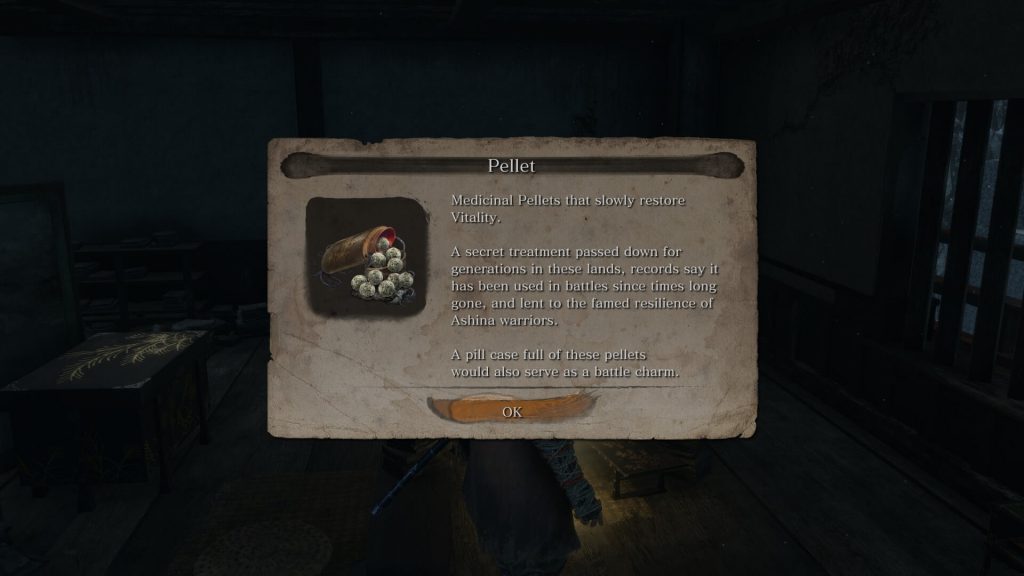 Make use of your items. In Sekiro, every item counts and is necessary as difficulty increases. Pellets, Oils and Ceramic tiles are abundant for a reason. Make use of them, because early on healing isn’t much of an option.

Which leads to the next point. Play tactfully and don’t be affair to runaway after your first death. The game has a two death mechanic. However, a true death will lead to a loss of sen and experience, and also the chance to get Dragonrot which is something that you want to avoid at all times. But more on that later. 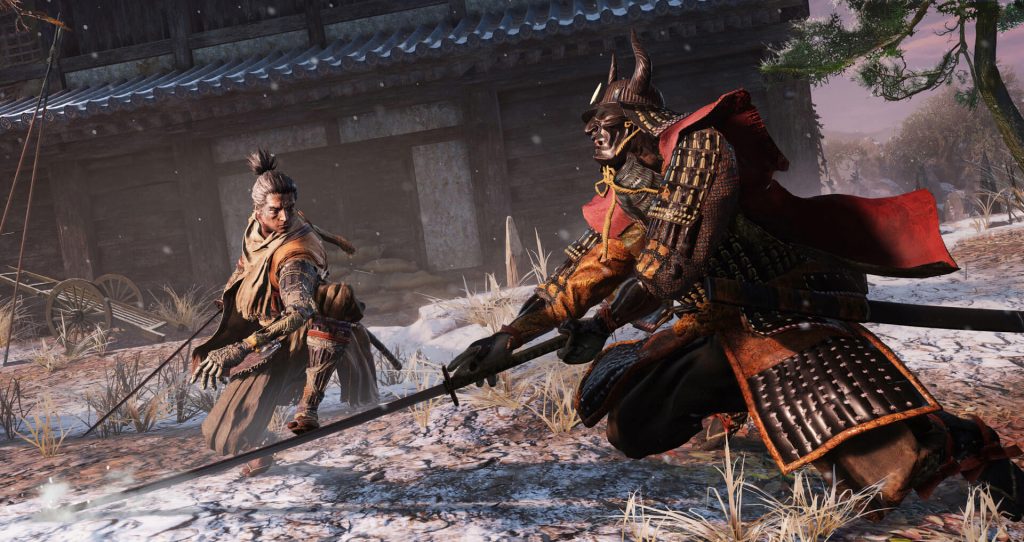 Remember you can often skip mini-bosses. Sometimes you need a new ability, technique or item to get an edge in the fight. Simply find another way and return later. Obviously this isn’t always the case with all bosses, but it is for all mini-boss encounters and high difficulty opponents.

Grind and earn that xp and gold. Which will also lead you to advance in combat and gain confidence. Allowing you more efficient ways of neutralising the enemy. While earning ability points, which will add to your power. If you notice that you’re close to gaining an ability point, its better to grind and retain that point.

As mentioned before the game revolves around quick sword to sword combat. Therefore, the usual dodge and roll mechanics that we have become accustomed to are no longer are as effective and should not be your main strategy for survival. 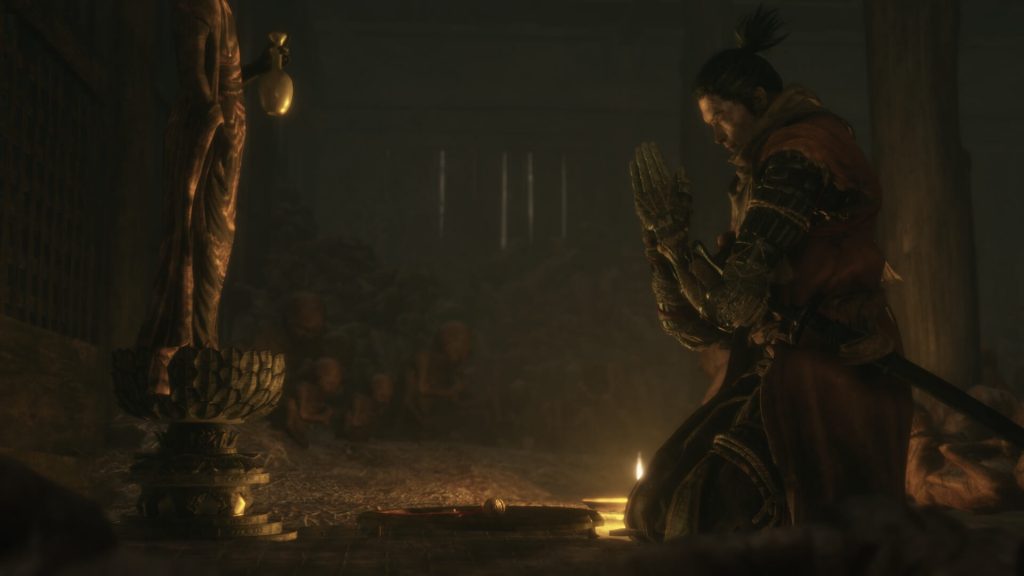 In Sekiro, we are encouraged to attack the enemy head on and our path to victory is either through a quick succession of strikes or the ability to deflect and block enemy attacks until they lose their posture and become opened for a deathblow. Maneuvering is still a viable option, but requires a certain level of comfort and experience before becoming part of your arsenal.

Because of the importance of defense and the opportunity that it provides you, holding your position is key. It is a dance, in which both offense and defense are fluidly interconnected. Deflecting and blocking can still lead to a kill. Not to mention the negation of 80% of enemy attacks, including some ranged attacks. Be adaptable and cunning in your approach and you will be victorious. 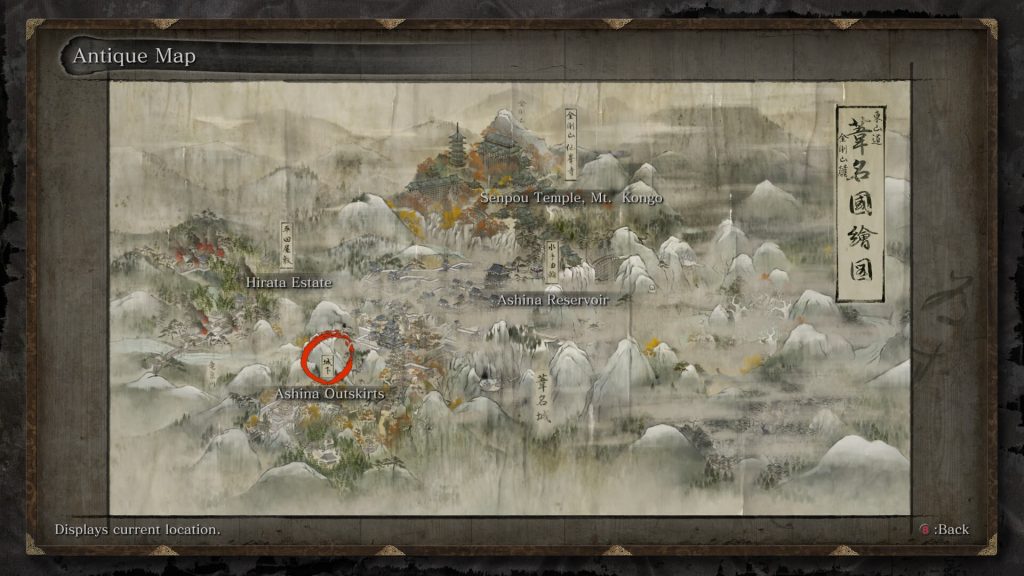 Stealth attacks and killing is the key to this game. Once you have a basic understanding of your surrounding and enemy positions and movements. Begin to strategically cut down their forces. As a Shinobi your greatest strength lies in the shadows. So why drag out a fight, when you can use alternative methods to dispose of your enemy? The longer the fight the higher chance of damage or death.

One by one they shall fall, until none is more.

From the beginning of the game these stealth strategies are available to you. The first is to sneak behind your enemy for a deathblow. The second is to jump form above onto your target. And the third and fourth are essentially using sprint to go behind the enemy or strike successions for a quick deathblow opportunity. 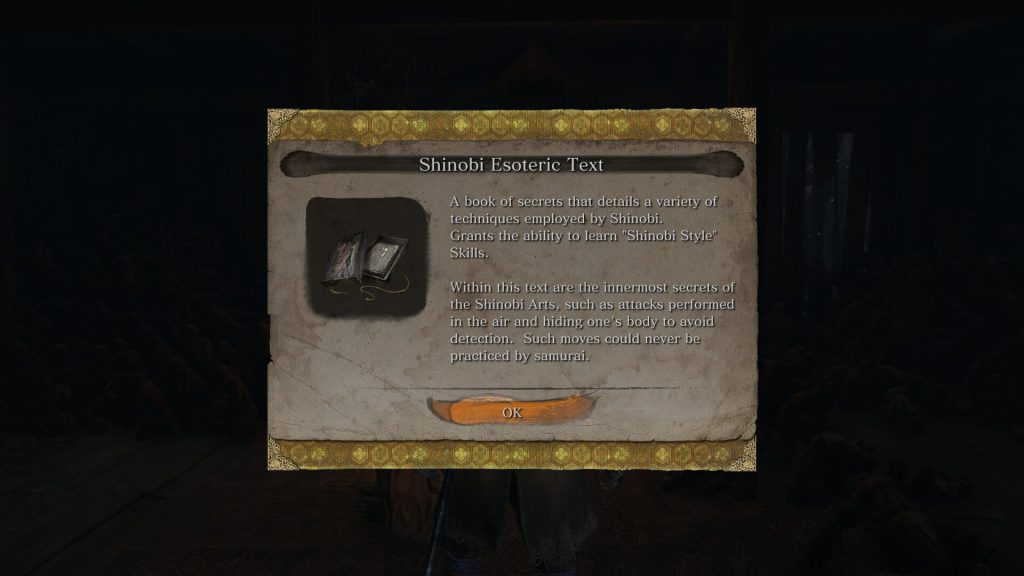 As you advance in the arts you can begin to move unnoticed. And from the beginning you can stealth mini-bosses to shorten fights and even take on stronger opponents. Stay in the shadows Shinobi.

Coin managements is a key part of the game. Buy pursues when you meet vendors to save coins on death. Which you can then later on sell back to them, before making a big purchase. Remember there is a limit to this and do not worry too much about sen. As it is easily regained once you learn to farm and through the use of certain items to grant you bonuses.

Dragonrot only takes effect from true death. That is why it is recommend to resurrect and run away to safety or a shrine to reset and retry. The initially penalty of Dragonrot is 15%, followed by another 3% until the lowest point of 3% Unseen Aid is reached. Do not worry however, it is curable later on in the game.

BONUS TIP: Notice those two icons above your healthbar? Well those are indications of your death protection. One is gained everytime you rest at a shrine and the other is gained through combat. In the case that you see it crossed out due to dying, do not be alarmed. By gaining a deathblow any remaining death protection will be returned.

This final section will give you a brief overview of the important skills, items and tools that will be a fundamental part of your gameplay. The majority, if not all will be found in the early parts of the game. And therefore you are not required to go out of your way. Just keep to the previously mentioned statement about exploring and taking your time to uncover new secrets. 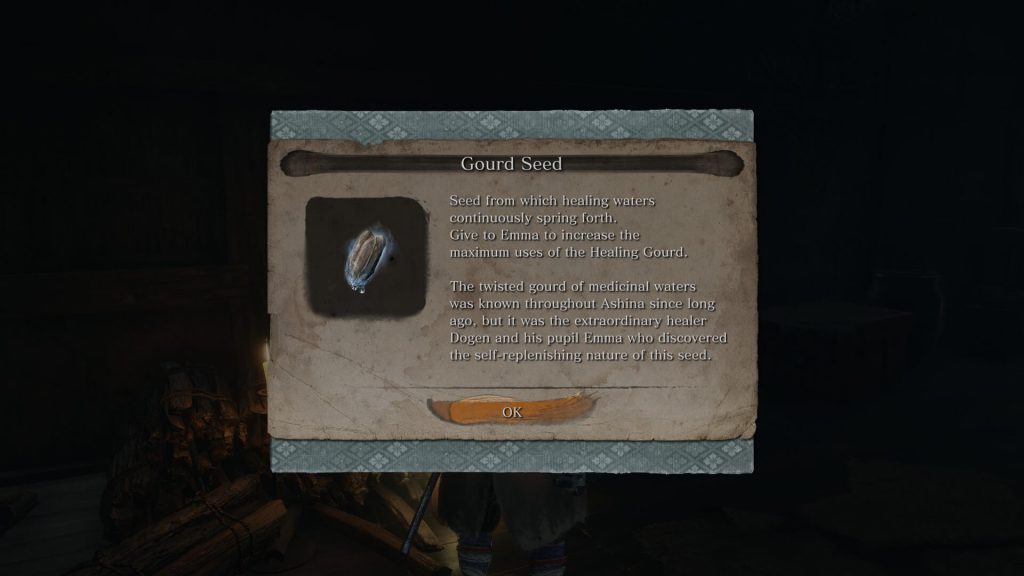 There are essentially two items that are of the most importance when it comes to improving your survival in addition to those listed below:

The first is the Gourd Seed, which are used to increase the number of heals available on your Healing Gourd. Totaling 9. And the other is the Pray Bead, four making up a necklace. Where each necklace then increasing your vitality and posture by 20%. A total 10 necklaces & 40 beads to collect.

Dousing Powder – for treating burns and also increasing your resistance to them.
Fistful of Ash – to temporarily reduce enemy vision and give you the upper hand.
Oil – combined with your Flame Vent Prosthetic, best used for strong enemies.
Ceramic Shards – for getting the attention of unsuspecting enemies.
Ako’s Sugar – increases your attack power.
Ungo’s Sugar – decreases vitality damage taken by you.
Gachiin’s Sugar – suppresses your sound and presence.

Within this Sekiro beginner guide, you have everything you need to know to find your way through the game. Focus on the fundamentals and bettering your ways of taking on the enemy. Try your best to avoid looking at too much information as this will diminish your experience of the game. If you get stuck in a fight or area, give it time. Go and practice, earn some xp, explore a bit; and you will find your way.