Cryptocurrencies can be the future of money, and even though they are still in their infancy and lacking the regulatory systems and networks to fully utilise. The shared agreement to use and embrace this new wave of technological assets, means that the current financial systems that control, regulate and maintain paper currencies such as the USD, GBD, EURO, YEN etc will no longer maintain a monopoly over the financial and monetary markets, and moreover, human affairs.

Cryptocurrencies are used primarily outside existing banking and governmental institutions, and exchanged over the Internet. While these alternative, decentralized modes of exchange are in the early stages of development, they have the unique potential to challenge existing systems of currency and payments – Wikipedia

Cryptocurrencies have been known to make many rich and therefore, there has been a financial incentive for early investors that that pick the right coins. There has so far been two waves of monumental growth in the cryptomarket. The first being that of Bitcoin, and more recently that of Ethereum (which isn’t actually a coin/currency as many believe).

These digital assets make a great investments for those wanting to diversify their portfolios or those interested in investing in the “future” and its potential technologies. Much like gold or silver, they can also be backed and stable when traditional currencies fall or become obsolete. And as a side effect have become similar to stocks, bonds, Forex and the commodities markets. Where people are now trading them on a daily basis due to the movements in prices.

Great, So Where Do I Begin?

There are essentially two ways to enter the market. The first is to buy the coin using your money of choice, either early in its funding or down the track. Or by “mining” the coins using computation. Which is the system that allows for these decentralised proofs of transactions to occur in the network. Read more here

After dabbling in cryptocurrencies after the first wave (through purchase & mining) and missing out on the Ethereum bubble through the second wave. I decided that I could not afford to miss another opportunity like this. Through research into the market, I rediscovered old coins and many new tokens that are interesting and that could hold long-term potential. These will be a great starting point for you. This list is regularly updated and maintained based on changes. 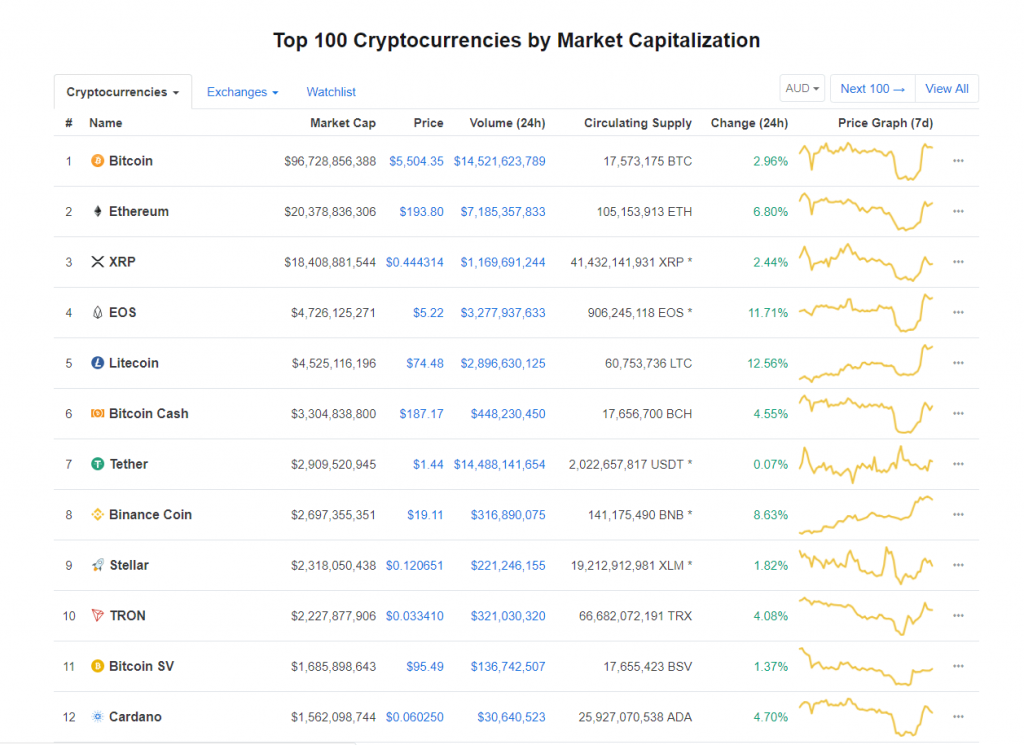 [Note: I am not a professional, so risk on your own merit]

Cryptocurrencies To Invest In 2020

The original golden child of the cryptocurrency world and often synonyms with the word “cryptocurrency”. Bitcoin is the first peer-to-peer digital currency to have entered the world and has seen monumental growth and recognition since its creation in 2009.

Ethereum is the second most hyped cryptocurrency that entered the market and has lead to a huge spike of investment and intrigue within the space. Basically what makes Ethereum different to the likes of Bitcoin is that it is a platform that other products (tokens) can be built upon. And has additional features such as smart contracts that make it a much more viable solution in the world of commerce.

Bitcoin Cash, also known as Bitcoin ABC is a hard-fork on the original Bitcoin protocol and technology. Aimed at fulfilling the original promise and ambition of Bitcoin. By being providing users reliability and low cost transactions, in addition to other quality of life features.

Litecoin is quite similar to Bitcoin. Because it was built on the Bitcoin protocol and uses much of it’s design & technology. However, where it differs is the hashing algorithm used. Which makes it easier for consumer grade GPUs to mine it. Which results in a more cost effective and faster platform of exchange.

EOS is similar to Ethereum in that it’s an blockchain technology that other applications can be built on. However, due to its design the range of potential applications are greater than that of Ethereum. EOS claims to allow vertical and horizontal scaling in addition to features such as accounts, authentication, databases and more.

The Binance Coin is the cryptocurrency of the Biance platform. And given that it is the main currency of the largest global crypto exchange means that it is also one of the most backed, used and value names on the market.

Monero is a cryptocurrency where the focus is on privacy and untraceablility. Where you have complete control over your transactions and balance. In many ways attempting to fulfill the role of cash in everyday economies.

Dash is self described as the modern cash of the digital world. With fast, easy payments and great security and optional privacy features. Supporting the world of commerce.

NEO is an open source and developer friendly smart- contract platform similar to ETH. With comprehensive suite of tools, resources and languages to empower its users from anywhere in the world.

Almost all the coins have spiked in gains and are undergo stabilisation to the markets demand and supply. It’s very clear that there is a strong correlation between the movements of Bitcoin and the other alternative coins (Altcoins).

Attracting people that want a share in the pie, which leads new buyers to look at other currencies for the next big win. Watching the ups and downs of Bitcoin (BTC) will often give you a decent idea of the market movements.

When investing in Cryptos, it’s important to understand the power of hype and human emotions. Not only is it a highly competitive and demanding technological space, but there are many with their eggs on the different sides of the market. There is news and media with contradicting information and even fake news. However, these tactics seem to have eased off somewhat as the market capital has fallen.

In saying all that, it is now been over a decade that the cryptocurrency market has been active and growing. And given that through platforms such as Binance and many others, people are day-trading and making money on the market movements. Means that at the very least there is some support and economy behind the cryptocurrency marketplace as a whole.

It is up to you to decide how you would like to approach it. But there are plenty of opportunities, both long-term and short-term to make money within the space. However, please approach it carefully and consider what you end goals are.

Furthermore, we need to realise that the other coins and tokens are valuable regardless of what Bitcoin is valued. Some would even argue that Bitcoin has no future and is currently more of an icon and store of value. Even though cryptocurreny has become synonymous with Bitcoin, it isn’t the end and the future of the technology. Hence the multiple Bitcoin forks.

With new coins starting every other week. There is an ever growing list of options. However, for those who are in it for the long-term, then serious thought must be given to longevity of the coins and their platforms. Also realise that many fulfill the same/similar functions and therefore, are directly competing with one another. Visit the 7 long-term cryptocurrencies for a better idea.

One thing is for sure, the cryptocurrency market is overall unpredictable. Until the technology becomes more matured and integrated with the current global infrastructure. And systems, products and services are built around it.

But it is safe to say that previous trends of the cryptocurrency market is the safest indicator of its future. Identifying these trends is the key. And now that people are trading it and some even making a living off it, there is an even greater incentive for its survival and future utilisation and integration.

Where to Buy Cryptocurrencies

Coin Market Capitalizations gives you a real-time charts of all the cryptocurrencies in all major world currencies. Keep up with the news using Google Alerts or the Reddit cryptocurrency sub. Follow Youtubers such as Ameer & Louis for latest news & discussions on the topic. And checkout ICO listing websites to see the latest startups based on the these innovative technologies.